Today is the 72nd anniversary of the liberation of Auschwitz, the, by now, well known concentration camp in Poland run by the Nazis during WWII. On my calendar it is marked as being International Holocaust Remembrance Day.

I searched diligently through the newspaper today looking for some acknowledgement of this day's somber anniversary but could find no specific mention. What I did find was an article about the upcoming election in France and it carried a headline that was pertinent to my topic for this post. 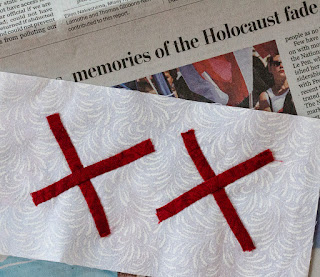 The 702373 Project is a worldwide collaborative art project commemorating the lives of the 70,273 physically and mentally disabled people (men, women, children) who were murdered by the German Nazis in the period spanning January 1940 to August 1941. Conceived by quiltmaker Jeanne Hewell-Chambers  http://thebarefootheart.com/introducing-the-70273-project/ the fiber art project is intended to symbolize the horrific loss of life that occurred and the scant consideration given to the value of those lives.

Each person had a medical form with brief details. The forms were read by a team of three Nazi doctors. If the person was deemed "unfit" or an "economic burden" the doctor placed a red checkmark (or X) on the form. Once a form had two red checkmarks that was sufficient notice that they were to be eliminated and most were murdered within the next one or two hours time. The doctors never saw or spoke with the persons whose fate they were deciding. 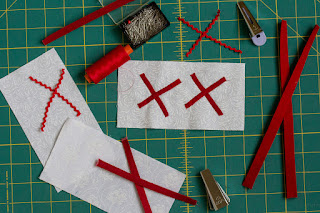 The intent of the art project is to create a cloth "form" with the two red checkmarks, one form for each of the lives lost in this callous way. The rules are simple; take a piece of white fabric (white only to remind us of the simple white paper form used) and place two red checkmarks on it. There are three different size you can make. The checkmark can be made with fabric, embroidered, embellished with ribbon or trims or fabric painted. All the details can be found at the website listed above.

I am grateful to Denniele of Louanna Mary Quilt Design  for bringing this to the attention of many quilters. Denniele has been mentioning this frequently on her facebook page and tomorrow is hosting a fullday event in Harrisonville Missouri to invite others to make blocks and then the blocks will be assembled into quilts.

Today I completed my first block and cut backgrounds and red for the crosses such that I can make more.

Won't you please consider joining in this ambitious effort to commemorate the lives so casually taken? Thanks for reading.

It sure has been a while since I updated this blog. Whoops. But to break the drought I wanted to let you know how proud I am of my number 2 son who has just completed and delivered his second quilt, "Alice's Peeps". 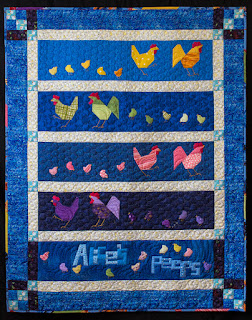 This quilt was made for the 3 yr old daughter of a workmate. Some many months ago Alice graduated from her crib into a big girl bed so it was decided a quilt would be an appropriate way to mark that transition. Again, a foundation paper-pieced pattern was used (the hen, rooster and chick from "A Quilters Ark" by Margaret Rolfe) for the chickens but the overall pattern layout/setting was designed by my son. In the lowest row he was inspired by the book "Word Play Quilts" by Tonya Ricucci in creating the letters to spell out the name of the quilt. 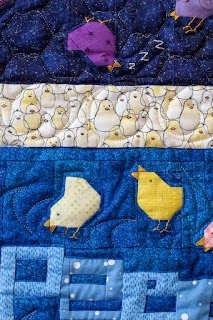 The chicks were arranged randomly but he wanted to have one chick asleep (see purple chick above). 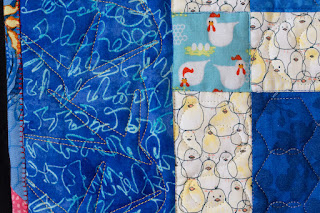 We had lots of fun visiting the fabric shops to find chicken themed fabric but most of the rest of the fabrics came from my stash. Note the chicken foot quilting pattern on the scribble border. 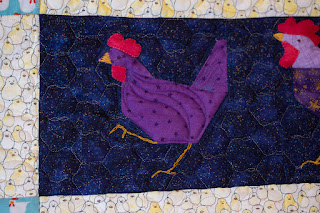 The plan was for each row to be colored a different fun color while blue would be a constant background color. In addition to the paper pieceing there was the challenge of hand embroidering the beaks, eyes and feet. For the combs and wattles it was decided to use a red wool fabric. 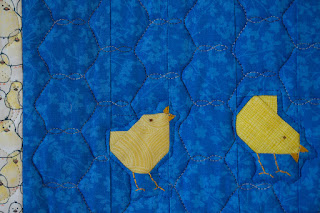 Check out the chicken wire quilting. The quilt was longarm quilted by Jenny Eccleston with input from son and I. 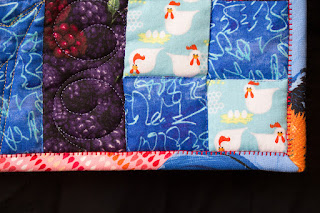 I do admit that I was drafted to do the binding. We had used more fabric than was initially anticipated on the back and what we wanted to use for the binding had to be augmented. The suggestion was floated to make it scrappy and insert some of the colorful fabrics that were used to make the hens, roosters and chicks. Since this is for a 3 yr old's bed the binding needed to be robust so it was machined on on the back side first, turned it to the front and then buttonhole stitched it down, choosing red thread to repeat the color of the combs and wattles. 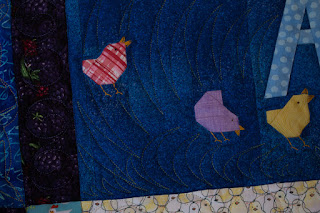 Chicks roamed freely all over the lowest name row. The blackberry fabric was deliberately chosen because that fruit is a favorite treat for Alice. 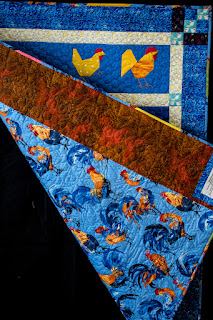 We happened across this wonderful rooster fabric in the quilt shop markdown bin and couldn't resist buying it for the backing.

Work has commenced on the third quilt and ideas are forming for a fourth.The first two quilts were for firstborn girls and now each girl is soon to have a baby brother.

That first quilt, featuring sheep, made a short appearance on this blog on October 28, 2015.

This  one, Alice's Peeps, turned out to be a great quilt don't you think?
Posted by Dorry at 9:09 PM 2 comments: 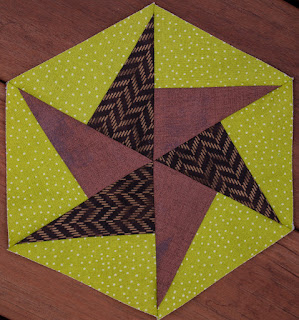 This block is a tessellation which creates a rotating star - a mill wheel of sorts. Although I initially tried to find a fabric that would give a circular swirl to the center I was not successful. Instead I chose a new "milk chocolate" to go with the "dark chocolate" brown I am featuring in my project. Having decided on my setting plan I now need to concentrate on which color fabrics I put where as that will impact their location in the finished article.

In 1881 William Morris purchased Merton Abbey, on the Wandle River south of London, which had been a textile factory. Having decided to weave, dye and print his own fabrics Morris wanted a premises that would facilitate doing this in the traditional techniques. Merton Abbey was a mill with a water wheel which would provide his power source. In 1940 Liberty and Co purchased the Merton Abbey and used it until 1972 so there is a good deal of interesting history to be discovered by a visit today.

For July 9 our block was named "Thames Path" 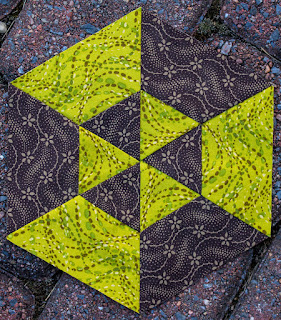 Again, I employed careful fabric selection and cutting choosing fabric with a swirling pattern to evoke the swirling currents of the river.

William Morris had two homes named Kelmscott and both overlooked the Thames River and he was very fond of both homes. On occasion the Morris family traveled by barge on the river from one home (Kelmscott House, a townhome in London) to the other (Kelmscott Manor in the Cotswold village of Kelmscott) . 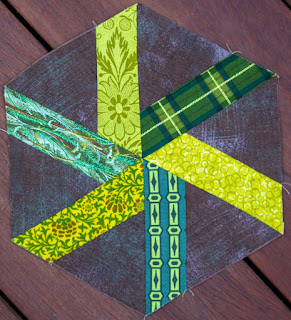 For this week Barbara gave us an alternate block, explaining that it could be used in lieu of this week's block or made as an extra to use in place of a future block that one might decide not to make (because of the complexity of the design). Thinking this might be a good insurance policy I went ahead and made this block deciding to construct it using a variety of fabrics so it would be sure to blend in with the others. I really like how this one turned out and will keep it in mind to maybe make more versions of should I need to have extra blocks.
Posted by Dorry at 8:09 PM 1 comment:

For July 2 we have a  block named "Red Lion Square" to acknowledge the two times William Morris inhabited this London Square in Camden. 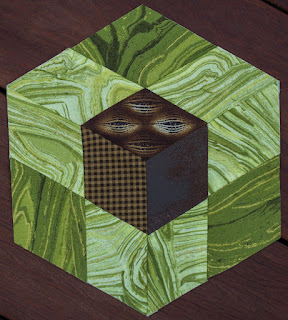 The beauty of this block pattern is it's 3D appearance. To highlight that I decided to make a feature of the front corner and to also use a "grainy" fabric to show change of plane. Now looking at it I'm not so sure about those four "eyes" staring out form the top side of the brown corner.

After leaving Oxford University William Morris and his friend Edward Burne-Jones rented rooms at #17 to use as a studio/residence from 1856 to 1859. Lacking the money for much in the way of furnishings they designed and built their own medieval style furniture. William Morris returned in 1861 and rented the entire premises at #8 for Morris, Marshall, Faulkner and Co for use as workshops, offices and a showroom. The Red Lion Square area suffered major damage as a result of German bombing in WWII but #17 remains and may be visited.
Posted by Dorry at 7:59 PM 1 comment:

For June 25 we were given a block named "Greenwood". 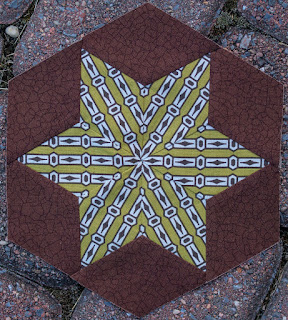 This block used only the one shape so I used two different fabrics and fussy cut that one striped fabric.

"I named this basic block Greenwood for a mythical place, a symbol of the English forest. Greenwood refers to the Anglo-Saxon culture before the invasion of the Norman French in 1066."

There were lots of great photos of quilts to be seen in the (Material Culture) post this week. One of them has been earmarked by me as a potential way to set my blocks.
Posted by Dorry at 7:56 PM 1 comment:

For this month, June, in the Westering Women series we had the story of the trip beyond the Platte River and the necessity for the women to come up with a new style of apparel; the Bloomer Costume. 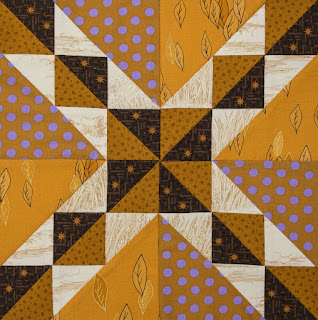 Named "Hill and Hollow" this month's block goes with the tales of having to navigate Windlass Hill, a very steep incline to get the wagons down. It required much effort by the men to inch the wagon's down the hill and they were assisted by some of the women who held on to a rope at the rear to act as an additional brake to prevent losing the wagon to the steep slope. The women adapted their usual dress by adding trousers underneath their long skirts to protect themselves on the descent.

Fortunately the reward for safely negotiating this hill was the arrival at Ash Hollow, a much needed source of fresh, clean spring water.

For this block, made while on a guild retreat, I focused on careful cutting of my fabrics. Thanks to the advice from my friend Ms Pink (who is also working on this project) my little wagon is in there almost halfway down the hill. Do you see it?

My words and photos are copyrighted to my Colvin Kiwi Quilts blog. Please be so kind as to ask me if you can copy or otherwise use them.